WOW. I stumbled across a juicy one here – can’t believe I hadn’t heard/read of this one until now. This book is so good… Roger Stern and Mike Mignola? MIGNOLA? Holy smokes this is good stuff.

The story starts with a man known as “the Aged Genghis” telling his Acolyte how he came to know both Doctor Strange and Doom in their youths. It’s a neat way to throw in some exposition that works both as never-before-heard-tales for long time readers as well as a crash course for newcomers. Afterwards the Genghis sends out a message to all the sorcerers/magic-wielders of the world (Strange and Doom inclusive) inviting them to a meeting that turns out to be the trial to dub a new Sorcerer Supreme.

Seriously? This is where it happens? I haven’t bothered to check yet, but I thought Strange attained the title of Sorcerer Supreme ages ago, but if this is actually the book where it first happened and not some odd retcon – damn. Either way it’s really cool. We get to see the forms of Agamotto, Oshtur and Hoggoth, where they combine their forces to seal the Aged Genghis, thus creating the challenge for the sorcerers to free him. The sequence is neat and the writing is superb – Stern really captures the flow of the action and the dialogue. In the end Strange comes out on top and releases the Aged Genghis, thus becoming the new Sorcerer Supreme and everyone’s all stoked and glad for him.

BUT… Strange must honor a boon to fulfill his new title, kind of like consummating a marriage. Since Doctor Doom was the only other person that didn’t fall during the contest, it’s him that Strange must answer to. Instead of some twisted plan to take the world, Doom requests Strange’s aid in freeing the soul of his mother from the clutches of Mephisto.

There’s more exposition where Doom’s servant, Boris, details Strange in the backstory of Doom’s parents and how she sold her soul to Mephisto, and finally the two venture to the Netherworld to confront the demon. Once there the book turns into a non-stop race against time as both Strange and Doom battle against the forces of Mephisto and eventually, through some deception and heartbreak, they succeed in crushing him and freeing Momma-Doom.

It’s such a great book with a pretty flawless three act structure, ever-changing but tied together perfectly. Mignola’s art really shined, especially during the Mephisto sequence, and I can’t stress enough how well-written the book is. I find it hard to stay entertained when exposition begins to dominate a story, but somehow Stern really pulled it off.

I can’t recommend this book enough, especially if anyone out there is a little rusty on Strange and Doom. It’s a great standalone story that doesn’t require much, if any, prior reading. Give it a whirl, and get lost in the adventure of it. 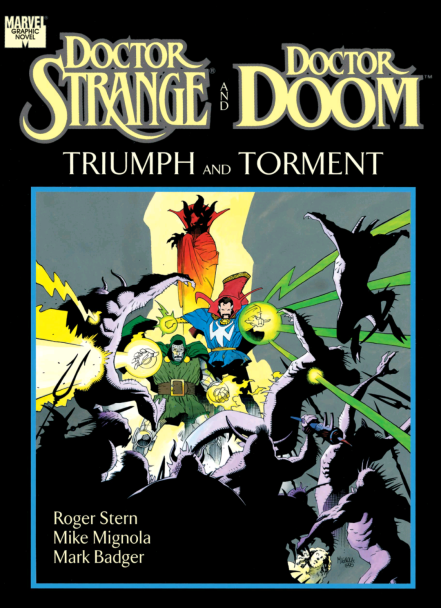