Issue two is a little slower than the first, but it does well in setting up what’s to follow, with a few cool bits along the way.

We pick up moments after where we left off and thus find ourselves in the midst of a vicious brawl between werewolves and vampires. It’s bloody and violent and too too short. The werewolves come out on top and make friendly with the humans.

Meanwhile, back in Vamp City, we’re introduced to the Count Orlok-esque vampire leader. He gets a little anxious to get the pipes pumping into the ocean to further the pollution of the world and that’s about it apart from killing one of his servants because that’s what cold leaders do.

Back with our heroes there’s some campfire chit-chat where the Wolf Leader suggests finding more help to storm the vampire stronghold, specifically help from other creatures of the night. They set out in search of a rumored village and cross paths with a jack show closely resembling the Frankenstein Monster, who then leads the troop to his village teeming with like beings, as well as a stitched up Victor Frankenstein playing god in his lab. 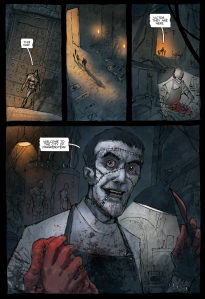 Like I said, it’s a slower chapter, but all considered it’s still a fun and quick read, especially how it so swiftly expands the mythos of this world without feeling to outrageous.

TL;DR Score: If there’s an ace in the hole for this book it’s the army of Frankensteins.