The hunt continues! It starts to get real juicy with this one. 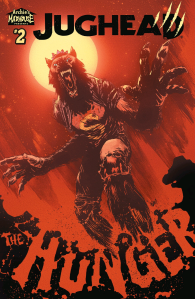 Principal Weatherbee is busy mourning the passing of the good old days in Riverdale when Reggie shows up, wolfs out, and, with some aid from Veronica, does SOMEthing to the poor old guy. I would assume he killed him, but my guess is he’s adding Weatherbee to the ranks since we don’t actually see what happened to him… we’ll see I guess.

Cut to Archie as he shows some skill in getting some good sparring hits on Cousin Bo, and afterwards being offered a weapon (specifically a silver gun with silver bullets) to protect himself.

Meanwhile, Jughead is laying low at a motel when he gets hungry and goes to a corner store for sustenance. He gets pegged by the cashier and Jug has to fight the urge to go wolf; however, he is cornered by police just as he leaves the store.

Jump back to Archie and the others where they have found their way to the circus Jughead left behind, where the carnies decide to pitch in to help the hunters in vengeance for Abbey’s murder.

Jughead is then rescued from the police by another werewolf and then abducted, after which we find out the cops are actually connected to Bo. Finally Jughead comes face to face with the werewolf in the woods where we find out it’s none other than That Wilkin Boy himself, Bingo, who’s ready to guide Jug into a new realm of lycanthropy.

This was a cool issue. Not much happened and yet so much did. I liked the twist with Bingo at the end and I like the momentum that’s swiftly building. I don’t know if this is actually an ongoing. Issue nine just came out, but that’s still low enough for it to be a limited series. Whether it is or not, I’m enjoying it so far and look forward to more.