I’ve been working my way through Peter David’s Aquaman. It’s been a hell of a run so far and this issue is no exception. 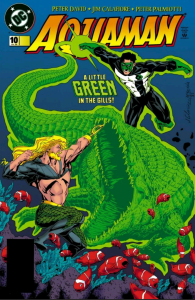 Aquaman and Green Lantern have a little dispute in this issue when people in a small town feel threatened by a vicious shark that nearly kills a diver. Kyle Rayner sets out to face his age old “Jaws” phobia, aiming to kill the shark in order to satisfy the people, however Aquaman is in defense of it because it is on death’s door, in which it’ll go through the ritual of being devoured by one of its own.

An odd concept to be sure, but well executed. I like how Peter David interpets sharks as forgetful beings; the way their conversations just deteriorate as they speak. These stories are cool, because David knows how to make Aquaman both fun and thought provoking. Sometimes it feels a little bit like a PSA for sea life, but most of the time it really doesn’t.

Peter David really brings us into Aquaman’s world, so much that it’s effortless to sympathize with his side of things. If not for the fact that we already know Green Lantern and who he is, he would truly come across as the villain here, and that’s just awesome. If that wasn’t the case then I’d say it’s a weak book, because if Aquaman isn’t the hero we can root for, what’s the point?

TL;DR Score: The more I read Aquaman the more I wonder where the bad rep really came from. The dude’s awesome!