I recently purchased the Return to Arkham revamp of the Arkham games on a crazy discount. I’m a devoted lover of these games; played them all to perfection dozens of times over – so I decided to give this prequel comic a spin. 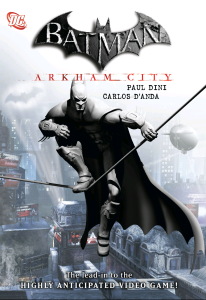 There’s not a whole lot to spoil here, because honestly nothing of real importance happens in tandem with the game that follows, but it’s still a decent read.

Written by Paul Dini, and beautifully drawn by Carlos D’Anda, we get to see a handful of tales surrounding the construction and launch of Arkham City. If you’ve played the game through there’s not a whole lot here that surprises you, but the standout is getting to see more of Quincy Sharp and his relationship with Hugo Strange. 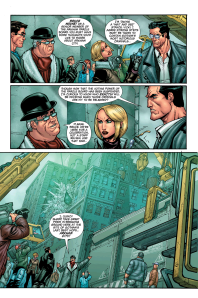 In a nutshell that’s basically all there is to it. We see Batman attempt to infiltrate the city and spoil the plans a few times, but obviously to no avail. I think what really rescues this book is D’Anda’s artwork. I mean look at it. It’s so rich in color and character and fits well within the realm of the Arkham series.

I’m also fond of the middle chapter of this book that follows a con in the city as he attempts to join Joker’s gang and then Penguin’s, thus causing a bunch of headaches for both parties. The twist? #spoilers it’s Batman. 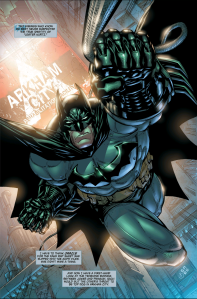 We all know Batman is a master of disguise, but it’s very rare that we get to see it utilized and done so perfectly. I didn’t even clue in to it being Batman until the final reveal. That’s Paul Dini for you. I wish he wrote more Batman books. Hell, a whole Arkham-verse ongoing with him at the helm would be amazing.

There’s also a few digital shorts at the end of the book, all by other writers and artists, but with Dini’s stamp on it. They’re all pretty cool, too. Honestly, they’re awesome, because they follow other characters such as Hugo Strange, Robin, and Bane (loooooved Bane’s story, obviously). You get nice snippets of these characters that sometimes don’t have a huge presence in the game at large, but reading about them here actually lends some personal groundwork for it, especially Bane.

If you’re a fan of the Arkham games and like me are looking for some wider universe material to consume, this is a good first stop. I’ll see about checking out some of the other books out there someday, but for now having had this fix I think I’ll get back to one-hundred-percenting the game for a tenth time.

TL;DR Score: Seriously, gorgeous art. It’s one of those books you don’t even need to read, just look at it.