It’s only a month until Carol Danvers ignites the big screen, so for the next month I’m gonna do a cram of the former Ms. Marvel for my sake and those too skeptical to hop on the band wagon.

Toot-toot! Away we go! 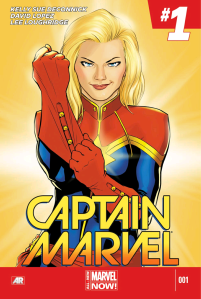 First up, the Marvel NOW! run.

This is a decent starting spot (considering, you know, it’s where I started). It spans fifteen issues, so if you’re like me and have a Marvel Unlimited subscription you can consume it in a day or two, or otherwise find it in some affordable paperback form. Helmed by Kelly Sue DeConnick (writer) and David Lopez (art), the run is uniform, fun, and all too short.

The premise here is that Carol is taking on the role of Avenger-Ambassador in space, working with the Guardians of the Galaxy and keeping tabs on what’s happening out there in the vastness of the universe. Simple. Fun. I’m set for a solid fifty issue stretch, but no, it’s just fifteen, and that includes three buffer issues that occur on Earth.

I’m not saying the stories or rhythm is bad, no, it’s just that the concept is a gold mine and could have gone on much longer and borne much more fruit. I get that it’s a year-long mission, but that doesn’t translate well in the real world where it takes twelve issues to even get anywhere. We all know how time is skewed in comics, right? They could’ve gone on for at least twelve issues. I mean, that’s like having Star Trek being about a five year mission and only giving us three sea- Oh yeah…

Anyways, barring my issue with short runs and comic timey-whimey stuff, this is a solid read. In it we get a lot of personal moments with Carol that define her as a hero, such as her choice to stay behind to liberate an endangered civilization, or her ability to overcome enormous odds to rescue her cat, Chewie (who, as it turns out, is not actually a cat…. but a Flerken…. that lays eggs ((it’s a funny story involving Rocket, but I’ll say no more))). There’s even an anniversary Christmas arc, both hilarious and touching. The only sore spot is issue fourteen which is a tie-in to the Black Vortex event that I know nothing about, but even that wasn’t half bad as a random one-shot.

This run has a little bit of everything, and at its core it’s interplanetary Captain Marvel action. I don’t find myself reading a lot of comics like that, but I found myself enjoying this one very much.

TL;DR Score: A solid jumping-on point, and even a jumping-off point at the end. It’s kind of self-contained and I think that makes a good run.