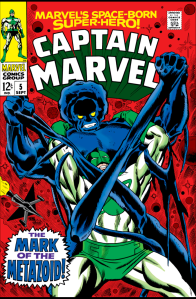 There’s not much to go on with this issue, but it’s a classic misunderstood monster story so it’s getting its due.

The meat and potatoes here is that a convict undergoes government experiments that turns him into the Metazoid, a freakish being with skin like putty. He gets sent to bring in Dr. Lawson (Mar-Vell) in order to expunge him of his past crimes, but the Metazoid is constantly conflicted with his mistakes and knowing full well the terrible things he has to do without any real reward (because he knows they’re just using him). Like seriously, it’s sooooo depressing reading this guy’s inner monologue and how messed up he is.

Meanwhile Mar-Vell is forced by the Kree to wipe the memory of the one man (a motel clerk) that could prove troublesome in keeping his identity under wraps, all the while dealing with his own turmoil of fighting for or against the people he’s been sent to spy on.

It doesn’t take long for Mar-Vell and the Metazoid to cross paths and get into a big fight in the mighty Marvel fashion. In the end Mar-Vell actually kills the Metazoid by blasting him with x-rays, but not without another flooding of guilt.

It’s actually a unique read. There aren’t a lot of protagonists (from what I’ve read) in this era of comics that are playing to sides of good. I’m curious to see where this all ends up, because Mar-Vell is constantly under pressure with Yon-Rogg and the rest of the Kree, so it’s only a matter of time before he has to make a definitive choice between his own kind and humanity.

TL;DR Score: Seriously… the Metazoid might be one of the most tragic science experiments of his age.