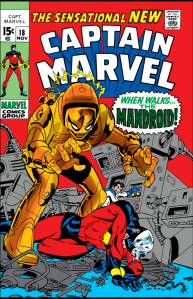 What a crazy rollercoaster it’s been for Mar-Vell… Holy cow. I mean, I didn’t expect half as much to occur as what did in so few issues, but what a thrill!

Quick recap. Mar-Vell got screwed on both the Kree and Human front, being branded a traitor and exiled to deep space. Oh, and Una, his lover, died during a skirmish with another alien race, so there’s that looming over him, too. He then gets imbued with great power by a god-like force known as Zo, aiming to exact revenge against Yon-Rogg, but it then turns out Zo was a Kree working in disguise alongside Ronan the Accuser in some insane plot to usurp the Supreme Intelligence of Hala.

No, it doesn’t stop there. The Supreme Intelligence then sets Mar-Vell up with some fancy new duds before allowing him to continue on his quest for revenge, but as he travels back to earth he becomes trapped in the negative zone. Now here’s the kicker. How does Mar-Vell escape? He manipulates none other than Rick Jones to find ancient Kree gauntlets that when he mashes them together swaps he and Mar-Vell’s spots… kinda like Ultraman.

Let’s stop there for a second. Captain Marvel and Rick Jones were arguably one and the same for a time? I mean, they aren’t really, but they kind of are, right? I never heard of this before…. In. Sane. I’m cool with it though. Chalk up another for Jones, that sidekick for all heroes.

Anyhow, finally Mar-Vell comes face-to-face with Yon-Rogg in another Kree outpost of old where he aims to utilize none other than (you guessed it) the Psyche-Magnetron! Carol Danvers is currently being held captive of course, so we all know where this is headed. Yon-Rogg unleashes the Mandroid against Captain Marvel, but before long the Psyche-Magnetron is destroyed and all villainous parties are disposed of. Carol is rescued by Mar-Vell and all is well.

No, there’s no immediate hint here that Carol has gained her powers, but this is the pivotal moment that recycles itself for ages to come.

I thought it was good, and a great close to this first chapter in Mar-Vell’s story, certainly in that it also sets the stage for his new life co-existing with Rick Jones (however long that lasts). All considered things seem pretty good for Mar-Vell, though only time will tell.

TL;DR Score: Like, is Rick Jones listed as a Captain Marvel alias on the wikis? If he isn’t I feel like he should…