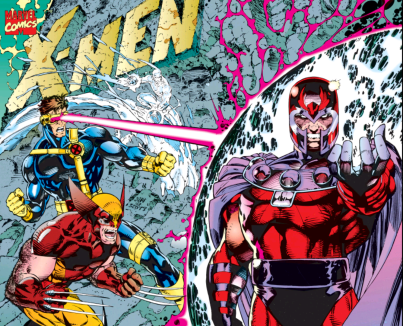 After many times meaning to dig into the 90’s X-Men book featuring Jim Lee, I finally succeeded in doing so. What I wasn’t aware of was the fact that the start of this series is actually the end of Chris Claremont’s decades-long X-Men writing career. Not that I can truly appreciate this having only read a portion of his work, but he actually finishes on a poetic note.

This arc features one of the better issue ones out there, in fact, it serves well as an origin story of sorts. It’s an ending masqueraded as a beginning, and I still can’t believe how well Chris pulled it off.

The main premise is that Magneto has made a new home for himself in Earth’s orbit on what he calls “Asteroid M” (a man after my own integrity, he is), and every faction of person has a reason to pursue him. The governments of the world want to nuke him, Mutant activists want to worship him and manipulate him into a martyr, and the X-Men of course want to make it all stop.

Thanks to this book I also now understand the meaning behind the two X-Men books GOLD and BLUE. I didn’t read either of them, and I figured the implication was of two X-Men teams co-operating, but it got confirmed for me here. It’s a nice ploy to have multiple stories going on with a slew characters in each without it being too convoluted. For the purposes of this arc one of the teams gets temporarily brainwashed to serve Magneto for a grand battle of X-Men against X-Men. It’s pretty good, and there are few artists like Jim Lee that can commit it so beautifully to page.

So in the end everything goes to hell. Asteroid M is destroyed and Magneto remains behind with a few of his close acolytes in order to give the X-Men a safe passage home. The final pages turn into a lamentation to Magneto and the mutant race in general (feels sort of like the end of Wrath of Khan), and we end on a picturesque view of the X-Men all together returning to Earth, and Claremont signing off.

It’s poignant. It feels like Chris’s final essay on the X-Men, and what he walks away with learning after walking with the characters for so many years. And yet, at the same time, it feels like the start of a bold new era, like the end of an origin movie: all of the X-Men have been re-introduced, and their purpose reborn. It was so cool.

Most of my exposure to X-Men came from the 90’s cartoon when I was a kid, and this is the first time in reading an X-Men book that that sensation really comes across. The vibrant colors, the lineup, the relationships and characters as a whole – it’s what I’ve always wanted. I won’t deny I will always have a soft spot for the original Stan Lee era X-Men, and Glob! (can’t forget Glob), but I think I’ve finally found the X-Men book I’ve been looking for… I feel stupid that it took me this long to get here.

TL;DR Score: Honestly? This might already be one of my favorite X-Men arcs. Like seriously, it’s a one-stop shop.