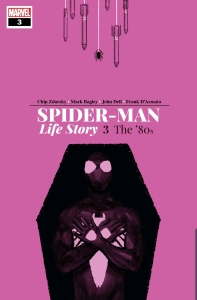 There’s a lot of love for Kraven going around in the realm of the web-head. Hunted has been awesome, but damn, this story brought some serious juice to the table.

We finally hit the Secret War with this one, and find that Peter Parker has married MJ and she’s just given birth to twins. Aunt May’s mind is also deteriorating, and if that doesn’t present some serious heartache I don’t know what will.

Anyhow, Pete attains the symbiote and uses it to overcome his fading youth and to uphold all the struggles of his life. Before long, a copycat Spider-Man shows up killing people with a rifle, and so Pete ditches the symbiote for the classic red and blue. When he faces the copycat, he meets an aged Kraven, dying slowly of cancer. Like Last Hunt, Kraven “kills” Spidey and buries him. This time however, it is the symbiote that rescues Pete, practically transforming him into Venom. He tracks down Kraven and is very close to ending him when MJ intervenes, subduing the symbiote with one of Peter’s inventions.

In the end MJ leaves with the kids and Peter stays to care for Aunt May. There’s also a tease of Kraven joining with the symbiote just as he’s about to kill himself much like in the comics, so that should prove a bountiful plot.

I adore this story. It moves a little fast and relies on the reader having a substantial knowledge of Spidey and the Marvel universe, but I feel like a casual fan could still find some enjoyment. Seeing all these characters age is neat, and maybe a little somber. It’s got that doom and gloom vibe like most of these grounded superhero stories, but I suppose for a character like Spider-Man that makes sense. A person overflowing with bad luck, this is likely what his life would look like in the more realistic scope of things.

It’s also a nice reminder of the fantasy we readers grow used to. This isn’t the 616 where the characters never really age and the bad is outlasted by the good. This is a version of that world with real consequences and a ticking clock. I’m excited to see in each issue how the reality of our world intervenes with a growing Marvel universe, but am also filled with the dread of knowing that the silver in Peter’s hair is on the horizon, and like as not his final hour.

TL;DR Score: Zdarsky proves himself a master of Spider-Man as a satire AND a drama.