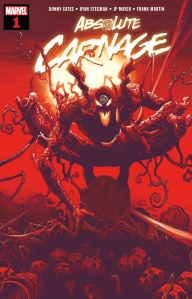 So I made the wonderful mistake of taking a peek into that new Carnage book I didn’t think I was gonna read, and I can say that if you’re skeptical by the cover price, and if you have even an inkling of interest in symbiotes and Spidey, then stop reading now and go pick this book up. It’s worth it, so damn much.

So apparently there’s a god of the symbiotes named Knull who’s been sealed away for years, but if any one symbiote collects the codex from most or all of the known symbiote hosts, they’ll be able to free said god.

TL;DR: Carnage is collecting all the codexes in a mad spree in a race against time with Venom and Spider-Man.

Also, apparently Eddie Brock has a son now, who’s tagging along for the adventure, but he believes that Eddie is his older brother, a secret currently being stowed away by our symbiotic hero.

This book is fantastic! It’s split into three chapters, and duly so. By the end it almost felt like I’d read a graphic novel, and this is only part one! Donny Cates writing is masterful and fluid. It definitely makes me want to dig further into the current Venom run (shame on me for unsubscribing way back, I guess). The real show-stealer for me though, as ever, is the art. Ryan Stegman is an absolute powerhouse in these pages. My eyes never got bored and it stood on the perfect verge of comic book and reality. Damn fine. I can’t wait to see more.

There is a lot of exposition in this, but again, it’s part one, so it comes with the territory, but also, like I said, it never gets boring. I can’t say I’ll pick up all the tie-in books in the coming months, but certainly I’ll stick with this main arc. I haven’t been this excited about Carnage in a looooooong time.

TL;DR Score: Like… seriously… a symbiote god? Really? I usually boycott that sort of twist, but this time around I gobbled it up.