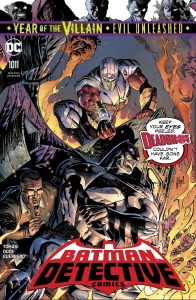 Happy (Belated) Batman Day! I was busy doing charity work at a local convention, but I managed to squeeze in some of my pull. This little arc was actually pretty good!

So Bruce is en route to Japan with a plane full of Wayne Board members when Deadshot shows up. All hell breaks loose when the plane crashes on a deserted island on account of a lightning strike… I know, right?

So some of the members are dead, but Deadshot remains virtually intact and actually goes about caring for the survivors as he seeks out Bruce. Meanwhile, our hero befriends two old men, American and Japanese pilots, who’ve been stranded since WWII.

Long story short, Bruce teams up with the old timers to defeat Deadshot and get home. The pilot elect to remain stranded as it is the only life they know or care for. There’s a nice finish that shows Batman dropping off care packages for the two men.

Certainly a lot warmer than the twisted Mr. Freeze epilogues that keep building towards an impending arc.

The story was fun. It moved pretty quickly, but had a lot of meat to it, too. It’s nice when a story carries itself without the need of a cape or cowl. I mean, Bruce did dawn a makeshift mask, but you get the idea.

TL;DR Score: How Deadshot didn’t clue into the not-so-subtle bat ears of the “not Batman” foe is beyond me.