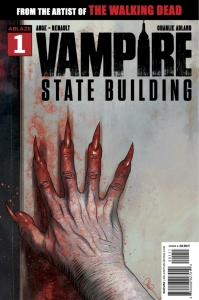 It looks like there’s a new comics publisher on the market in the form of Ablaze, and Vampire State Building is amongst their initial releases. This one is a solid hook with a promising plot to unfold.

A young man named Terry is preparing to fly off to Afghanistan having enlisted in the military, but his cousin Ashley has her concerns. They and their close friends, Terry’s ex, Mary, amongst them, gather at the top of the Empire State Building to celebrate his sendoff.

Meanwhile, a secret room covered in strange hieroglyphs is discovered on the 75th floor, and when a ceiling caves in, uncovering a corpse, several homeless and decrepits across Manhattan are suddenly drawn to the building.

Before long a small army of vampires fall upon the building, slaughtering people by the dozens. Terry and Mary take shelter on one of the upper floors with a group of the lucky few, barricading themselves in. Down below FBI shows up and everything starts to get some Die Hard vibes. At last, the promise of a big bad vampire rising from the past leaves us on a cliffhanger.

It’s a cool concept. It’s slated for six issues, I think? With that in mind I like the whole setup. There’s a solid kill count ready to tally, and plenty of action to occur, not to mention the gore and horror. It’s quite cinematic in nature. The moment the vampires reacted to the room being exposed was oddly chilling. Very cool!

If you get the chance, pick it up. It’s a good book and you’d be supporting a newer publisher.