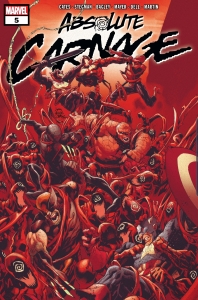 This event had a lot of promise, but it lacked… I was gonna say SEVERELY, but no, it only lacked a bit. This final installment really just felt like a cash cow, brutally so.

This was by no means an ending. I felt robbed. This was a good book. Absolute Carnage was all in all a solid book, but this quick cliffhanger aspect threw me way off.

It felt like there was at least, BARE MINIMUM, an additional issue to have a confrontation with Krull, but no. I guess we have to be satisfied with the promise of his arrival to earth?

I’ll grant it, the idea of “we win today but the big bad will come sometime later” actually feels very real and terrifying, but for the purposes of a self-contained arc that was all about stopping this person, it felt anti-climactic.

I mean, if it ends up being a lead up to ABSOLUTE CARNAGE UNLEASHED, sure, I’m game, but the idea that this was a big ad for picking up the next issue of VENOM feels just a bit much. I like Venom, I do, but when you bet part of your pull list on an event book you might expect a bit more. I did, and it ended a little ugly… only a little.

It was still a good bit of fun.

TL;DR Score: What happened to the Chapter markers they started in issue one????