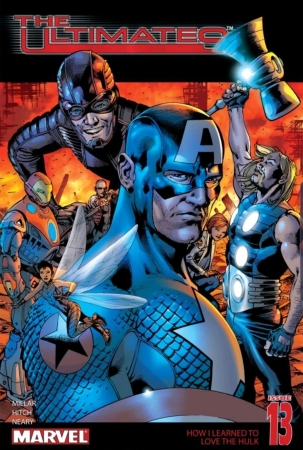 I finished up the first volume of The Ultimates finally, and I find it nothing short of awesome.

Following a slow start to their tenure as a team, having defeated the Hulk, the Ultimates are faced with the threat of the Chitauri, Nazi-allied aliens that have come back to haunt Captain America. What unfolds is a grand conflict that results in the deaths of many, but ULTIMATELY one of the greatest triumphs. The highlight for me, of course, is the Hulk’s battle with Herr Kleiser… nothing short of hilarious. Cap pointing Hulk to different foes and making outrageous claims with regards to the big guy’s sexuality is something I never thought I’d read, but given the nature of Mark Millar’s narrative it is tremendously satisfying.

You can definitely see a lot of the influence this title had on The Avengers movie. To say nothing of the Chitauri (they’re not the mindless bots they are on-screen), but the way the team comes together and interacts with one another is quite grounded and a fair foundation for their adaptation. Whereas the film is the more light-hearted variation, this has a lot more grunge and attitude which is good in it’s own right.

I’m starting up Ultimates 2 so it’ll be interesting to see how it progresses, but all in all the first arc in the saga is worth a read for any comics enthusiast, especially if you’re familiar with the original material. I think the overall tone of the book, despite it being set in the Ultimate Universe, is a bit too gritty for my personal taste when talking about the Avengers, but then again I guess that’s why they do bear the name Ultimates. Either way it’s a nice alternative take that Millar executes incredibly.