I picked up this book while I was browsing the web simply because the cover really caught my attention. With my recent indulgence of Lobo and having yet to start reading Aquaman, this seemed like a decent place to start. I guess you could say I was “hooked.” …

I’m really on the outs in terms of Aquaman know-how, but at this stage I guess there’s a whole element where he’s been raised by dolphins and he’s now trying to find and rescue his adoptive mother Porm… Porm?…. careful with the keyboard, lads. He tracks Porm to a Japanese research facility where she is being held for research.

Meanwhile, Lobo is off doing what Lobo does in the cosmos, seeking revenge for the kidnapping of his flying dolphin friend (what a coincidence!). Turns out it all leads to Earth and basically Aquaman and Lobo are gunning for the same jerk of a dolphin hunter

Aquaman and Lobo have brief encounter where they exchange blows, but ultimately join forces to bring down the poacher. Lobo frags the poacher’s boat, leaving Aquaman to sentence him to the sharks. It’s pretty hardcore actually – no boy scouts here!

It’s a fun read, though I was a little fuzzy in terms of the time and place of Aquaman history. I miss the days of single-issue-stories, and I’m always happy to see these little team-ups/crossovers/versus stories that are self-contained and to the point. I’m pretty sure this is the first Aquaman book I’ve ever actually purchased, and I’m certain I’ll never forget it.

TL;DR Score: When Aquaman frees the sharks and they’re left mesmerized by the hole he cut in their net is pretty spectacular. The book starts with some Parker monologuing over an elephant being poached (Kraven, maybe? Or just deep imagery…. MoreKravenMoreKravenMoreKraven #morekraven), and then we cut to Spidey kicking d-lister butt. Life’s going good for the webhead and the bad guys can tell.

We then see that Peter and MJ’s rekindled relationship is flourishing and it’s awesome. MJ ushers Peter to school and we’re reminded (if not by the cover) that the Lizard is Peter’s new prof. Apparently he has a classic Molina-esque inhibitor chip that keeps Connors in control and unable to lash out as the Lizard.

Connors is discussing with Peter the prospect of eliminating the Lizard entirely, utilizing the very machine that made Peter into Spider-Man, when Taskmaster and Black Ant bust in to rob the place.

Peter causes a distraction, switches to Spidey, and saves the day. Boom. All is well, but wait! Spidey goes and offers a helping hand to … Peter Parker!? WHAT? Two Peters – what does it mean?

It caught me off guard. Chameleon? Clone? Is Peter actually having a psychotropic dream and maybe all the MJ stuff is a lie? I hope not, but I’m hooked. Nick Spencer is bringing a fresh voice and tone to the webhead that I’m falling in love with, and Ottley’s art is unreal – sheer bliss to look at. I love it. I hope they both stick together on this book for a loooong time. All in all a quick and entertaining read that delivers on many platforms. Can’t wait for the next one. The Bendis saga breaks out into his first ongoing without a hitch.

Superman is busy searching the cosmos for Lois and Jon, while also trying to settle into his more isolated life back home.

He also sets up a new Fortress of Solitude in the Bermuda Triangle… It’s actually pretty cool. The way they present it is so cinematic and the idea of him making his new base in such a place is ingenious. I’m on board.

He then has a powow with Martian Manhunter, who tells Superman that he should aim to lead the world to a future of unity and peace, but it doesn’t sit well with big blue. The scene is also pretty humorous as Superman keeps getting distracted and rushing off to save the day throughout the conversation.

Finally Superman goes flying off only to find that Earth has somehow been transported into the Phantom Zone. Huh? But hey, there’s the promise of Rogal Zaar coming back already, so I’m there.

It’s a smooth read. It has me super giddy to see Superman kind of returning to his roots, but relating a very rich and all in all cool character. I mean it. Cool. Like, he’s #&(!ng cool! It’s Superman, the square-jawed boy scout, but he’s so cool. Bendis clearly has a fluid voice and vision for Supes, and it’s going great so far.

TL;DR Score: The moments of lonely Clark reminiscing his family were borderline tear-jerkers… I hope they get back together soon. 😦 So here I am! Branching out! I’ve ascended the boundaries of Facebook and now tread the wider realm of the worldwide web. Let’s hope things go smoothly as we continue to enjoy and reflect upon the panels and pulp of comic books. Until then, an obligatory image of that great villain of sheer narcissism…. 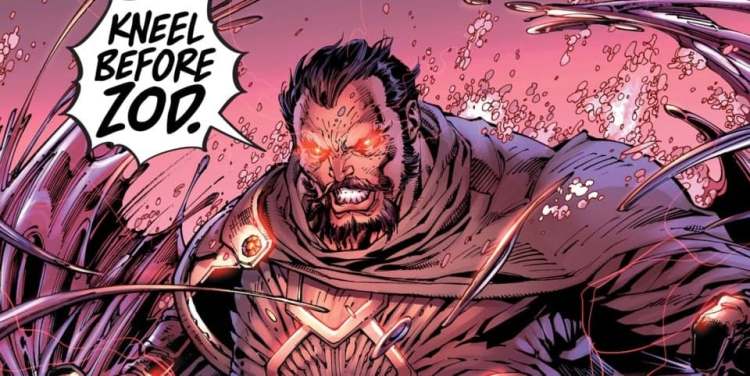